CARING. SMART. ABLE. PROVEN. Representation for the most severely injured.
Contact Us Now For a Free Consultation
Home
Our Team
Justin P. Wright 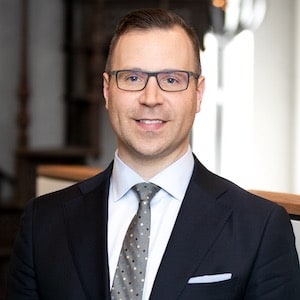 Justin Wright has spent his entire career serving people who have suffered permanent or serious injuries. He firmly believes in standing up for victims who have been wronged by large corporations and medical professionals. Mr. Wright has handled cases throughout the State of Maryland and its Federal Court system. He was part of a trial team that received jury verdicts of $5.1 million in 2016 and $14.6 million in 2017. Mr. Wright has also obtained numerous seven figure settlements on behalf of his clients. He was also named to Super Lawyers Rising Stars for 2021.

At Arfaa Law Group, Baltimore medical malpractice attorney Justin Wright can provide compassionate yet aggressive representation in your medical negligence, birth injury, catastrophic injury, or Wrongful Death claim. Arfaa Law Group and Justin Wright proudly represent victims and their families throughout the State of Maryland and the District of Columbia. Justin can be reached at 410-889-1850 or by email: justin@arfaalawgroup.com