The Face of Medical Malpractice of 2018, 2019 and 2021
Contact Us Now For a Free Consultation
Home
Noteworthy News
Amputee Wins $2.35 Million in Malpractice Suit 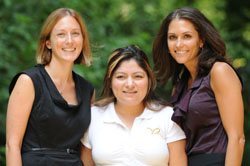 A Silver Spring woman, whose misdiagnosis resulted in partial amputations of one foot, another leg and a few fingertips, has won $2.35 million in a medical malpractice lawsuit against two doctors at Shady Grove Adventist Hospital.

A Montgomery County Circuit Court jury found last week that an emergency room doctor and a critical care doctor had been negligent in their treatment of Yesenia Rivera, 28.

After being diagnosed with kidney stones at Shady Grove, Rivera returned to the emergency room two days later on Aug. 3, 2006, in shock and extreme pain, according to her attorney, Julia Arfaa, of Salsbury, Clements, Bekman, Marder & Adkins LLC in Baltimore.

Instead of treating the infection that was caused by a kidney blockage, an ER doctor tested for a gallbladder problem and an ectopic pregnancy. That doctor gave Rivera too little fluids and too much medication, which cut off oxygen to her extremities and led to the gangrene that necessitated amputation, Arfaa said.

Rivera, who now uses prosthetics, once worked as a housecleaner and as a cashier at McDonald’s, but the amputations have made it impossible for her to stand on her feet all day, bend or lift heavy items. Without a high school education, her lawyers argued and a jury agreed, Rivera could not find full-time work and should receive compensation for lost future wages.

“There are few things she can do to be gainfully employed. I’m not saying she can’t work at all, but we told them what she can do and what she can’t do,” Arfaa said of Rivera, who now stays at home with her three children.

After her initial visit to the hospital, Rivera awoke two days later with “10 out of 10 pain” and was taken to the hospital in an ambulance, Arfaa said.

Rivera’s blood organs were leaking, Arfaa said, and she needed rapid infusions of fluids. Thornton gave her one liter of fluids and a fluid drip. She also put Rivera on vasopressors, a medication that makes blood vessels constrict to increase blood pressure levels.

When Rivera was transferred to the intensive care unit, Saxena continued to give her the medications without increasing her fluids, and a surgeon was not brought in to drain her kidney for 10 hours. Rivera’s blood pressure never rose, and Arfaa said the lack of fluids caused the vasopressors to cut off oxygen to her client’s extremities.

Despite the earlier kidney stone diagnosis, Thornton testified that she thought Rivera had an ectopic pregnancy (implantation of the fertilized egg in the fallopian tubes) or a gallbladder infection.

However, Arfaa said during the trial she met with the treating radiologist who told her he never thought Rivera had a gallbladder issue or an ectopic pregnancy and showed Arfaa a document the hospital and physicians had not produced during discovery.

“This order sheet said it was not for an ectopic pregnancy, but to rule out a ruptured kidney,” Arfaa said. “Clearly, that was the first thing [Thornton] thought of. Any way you slice it, she knew there was a problem with the kidney and an obstruction and she just completely blew it.”

The defense tried to paint a picture of confusion about Rivera’s medical issues, Arfaa said.

“There were so many red herrings that the defense had put up that I had to keep focusing the jury back to the case,” she said. “We just focused it on: whether she’s got septic shock or she’s bleeding to death, the treatment is the same, she needs fluids.”

Calls to the attorneys for Thornton and Saxena, Benjamin Vaughan and Andrew Marter of Armstrong, Donahue, Ceppos & Vaughan Chtd. in Rockville, were not returned.

The case never went to mediation and, at the pretrial settlement conference, the defense said it would not offer Rivera anything, according to Arfaa.

Arfaa said she understood the defense attorneys’ point of view — Rivera was lucky to be alive, considering her state when she arrived in the emergency room.

“Their theory was the emergency room doctor saved her life,” Arfaa said.

And, in Montgomery County, where juries are “extremely defense-oriented and conservative,” Arfaa said, the lawyers probably thought they had a shot at winning.

“There’s not a lot of plaintiff verdicts in Montgomery County,” she said. “They don’t want to believe that the doctors were negligent because, of course, doctors are trying to do the right thing.”