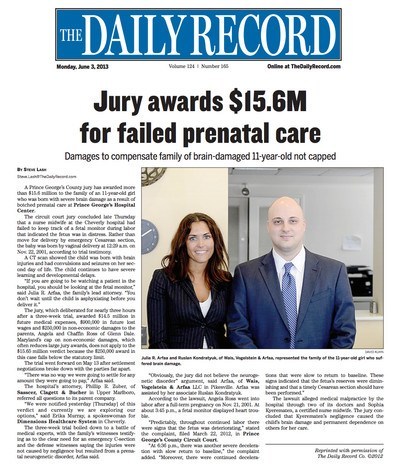 After a three week jury trial, WVF obtained a $15,650,000 jury award in favor of a young girl who suffered devastating brain injuries at birth when the defendants failed to timely deliver her by cesarean section. The child, who later developed cerebral palsy and a seizure disorder, suffered these injuries as a result of a lack of oxygen in utero and trauma to her brain during a rapid second stage of labor. The evidence at trial showed that the defendants improperly interpreted ominous signs on the fetal heart monitor, which showed oxygen deprivation. This mistake was further compounded by the negligent administration of Pitocin, which increased the strength and frequency of the mother’s contractions, causing increased stress and oxygen deprivation to the baby. The negligent Defendants were Sophia Kyermaten, CNM, Dimensions Healthcare Associates, Inc., and Prince George’s Hospital Center. The case was tried in Prince George’s County, Maryland.